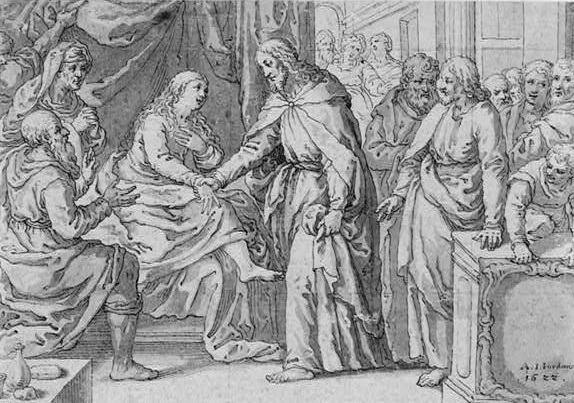 I lost everything, and then I gained back, and more. Let me tell you the story.

I was once a married woman, with status and standing in our community. My husband was the leader of the village synagogue, a moral leader. When he spoke, people listened. And I, as his wife, was a leader among women. It was I who organized the children to learn their Hebrew, I who counselled women in distress, I whom people looked to as a model of faith lived out in the world. In retrospect, what did I know? I didn’t know anything about faith and trust until I encountered Jesus… but I’m getting ahead of myself.

Life was comfortable and good. When I discovered I was pregnant my husband and I were so excited. And the village with us. A proper rabbi should have a family, they said. The pregnancy was wonderful – full of expectation and excitement. The delivery was not. The midwives said they had never seen such a painful birth. My little daughter came through healthy and strong but I was injured. From that day I had bleeding that would not stop.

At first my husband and my community were supportive. During the long recovery from childbirth they sat by my bed and passed the time with the village gossip. Prayers were offered and doctors were called. The medical men poked me, bled me, gave me vile things to drink, and took our money—but none of it helped. As the weeks of my haemorrhaging stretched into months which turned into years, gradually the warmth of my community cooled. You see, as long as I bled, I was untouchable to them. If anyone so much as held my hand they would have to go a process of ritual purification with the priests that could take days. So women stopped coming to me for advice. I was no longer allowed to be near children. And my husband, my husband stopped coming to me too. Even just to talk. It was as if the physical taint people thought I had, had become a moral or a spiritual taint too. That they would become unclean just from being in my presence.

One day I’ll never forget I was playing with my little toddler daughter in our family home. My husband came in with another leader in our community and with a stern voice commanded our daughter to get away from me. When he turned to me his face was like stone as he spoke the formal words: “I declare divorce.” And that was it. I was turned out of the house to make my way as best I could.

I was heartbroken. I don’t know how I survived those first months except from the furtive kindness of some of the women in our village. They could never be open about it though. I understood. Association with me meant taint for them. But I was grateful.

Eventually life—or at least the external appearance of it—resumed. My husband remarried so he could have more children and continue his respectable life. I learned what odd jobs I could do, and how to beg for my bread. I figured out how to get by but it was really only an animal survival, not living. Can you imagine never being touched by another human being? Can you imagine people scattering before you as you walked down the street, fearful of contact? Can you imagine eventually not being noticed at all, except with the kind of looks people otherwise reserve for corpses or feces in the path? That’s how it was for me. I was dead to the world. The only bright spot of my life was the glimpses I sometimes got of my beautiful daughter. I suppose that’s about the only thing that kept me going at all.

And then came the day that everything changed, first for the worse (if that could even have been possible), and then for the immeasurably, miraculously better.

For months before that day, actually, I had been hearing rumours of the teacher and healer from Galilee—how he was said to teach with authority, heal leprosy, and even cast out demons. It was amazing news but I took little note. That was for normal people in the world, not me. What I did take note of—and it seemed to extinguish what little light of hope remained in my life—was news that my daughter, just twelve years old, had fallen ill and was at the point of death.

I collapsed in the dust and ripped my clothes in despair. I don’t know how long I lay there. Only gradually did I become aware that there was movement and noise around me. People were shouting and jostling one another. Slowly I gleaned that it was the Galilean healer, come to our side of the lake. With a dull curiosity I looked up from the ground. I saw a chaotic scene. The healer had just got out of his boat and already the people of my village were pressing in on him to the point of pushing him and his friends back into the lake. Then the crowd parted and to my amazement I saw my former husband, the father of my little girl, come forward and lay himself in the dust before the healer’s feet. Never had I seen him humble himself in this way. He pleaded for the man to come lay hands on our daughter. Then the healer raised my husband out of the dust and followed him up from the lake to his house. And the crowd followed.

It was then that something rose up in me and propelled me to follow too. Faith, hope, trust, defiance, desperation? I don’t know. All I knew was that I had to get close to this healer. I didn’t even know what I wanted. Healing for myself? Healing for my daughter? Healing for a world so twisted that it can reject and exclude a human being from life because of men’s prejudices about blood? I dodged my way through the crowd until I was just behind the healer and his band of friends. I stretched out my arm to touch him. I didn’t even care anymore that he would be considered polluted from my touch. I just needed to know what might happen because it felt in that moment like something must.

And it did. All I did was graze the hem of his cloak but immediately I felt in my body that the bleeding had stopped. Had stopped! After all these years! That would have been enough of a miracle for me, but then even more happened. The healer suddenly stopped and turned around. I tried to merge back into the crowd, not bearing to be seen, but he asked who had touched him. I knew I could not hide. I thought for sure I would be in trouble for making him impure, but then I looked up into his eyes, trembling, and saw… not indignant anger but love. He looked at me. He saw me. You know what I mean by that? He sawme.Not Beggar In The Street. Not Impure Woman. But me.Myself in my whole, broken humanity. He saw me. And then he spoke and the miracle blossomed from a mere cure to full healing. “Daughter, your faith has made you well; go in peace, and be healed of your disease.” I was named that day as a daughter. Someone of dignity and worth. I was raised to life.

And then came the appalling news that my daughter had just died while the healer paused to give me life back.

I felt my heart plunge but somehow not break. I just remained looking at the healer, and as he looked back at me I knew somehow things would be all right. He turned then to my former husband and said, “Do not fear, only believe.” We all followed him, then, to the house I used to share with my husband. We waited outside as he went in with just a few of his friends. A lot of people were agitated. Some were angry with me. There was a strange excitement in the air, but in my heart I felt only peace.

Although he went into a house, there is no real privacy in my world. There are always people looking in windows and listening at doors. So whispered commentary kept circulating in the crowd. “He said she’s only sleeping!” “He took the body into his arms!” “He told her to get up!” “SHE GOT UP AND IS WALKING AROUND!” “They’re feeding her a meal!”

The healer’s name was Jesus. From that day I have devoted myself to him and the way he taught. “Do not fear,” he said, “but only believe (or trust).” And that’s how I have decided to live my life. That’s how he empowered me to live my life. I will not be bound by the fear of ritual impurity. I will not fear the stranger or the outcast. I will not even fear my own power to speak up for the lost or the lonely. For I was once dead in fear and now I live in trust to proclaim Jesus’ way of love.