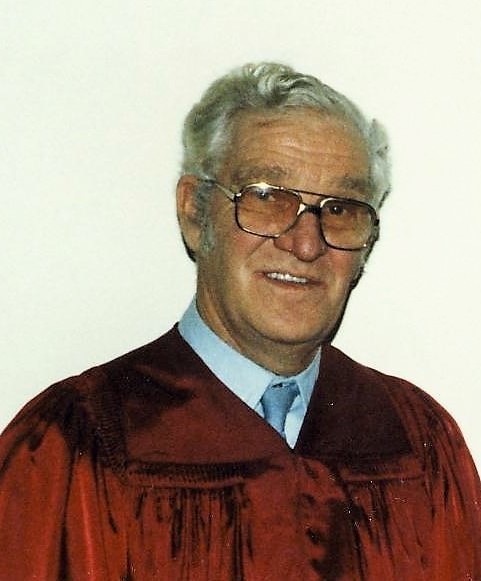 Ansgar Christensen (94) of Calgary, Alberta passed away on Sunday, February 14, 2021 in his home at Prince of Peace Manor, with his loving wife of 71 years, Evelyn, at his side. Left to cherish his memory are his wife, Evelyn; his children, Cathy (Paul) Johnson of Camrose, AB, James (Naomi) Christensen of Kelowna, BC, Dagne (Les) McMurtry of Calgary, AB, and Janice (Dave) Gross of Lethbridge, AB; 11 grandchildren, 6 great grandchildren, and 2 great-great grandchildren.

Ansgar, a third son, was born in Ruskin, Nebraska on May 10, 1926, to Anna (Gregersen) and Andrew Christensen, both Danish immigrants. In 1930, when crops were threatened by drought, and when southern Alberta was offering land supplied with irrigation, the family, together with several others, made the journey north to start a new community. Strong faith was the foundation of this group and together they got busy immediately to start building Bethany Lutheran Church in Tilley, AB. Later, Ansgar attended high school in Brooks, AB and went on to study at several post-secondary institutions. His broad interests led him to the Canadian Lutheran Bible Institute in Camrose, AB., Dana College (Nebraska), Lutheran Theological Seminary (Saskatoon, SK), the University of Calgary, and the Banff School of Fine Arts.  He graduated with an Education Degree in 1963 from the U. of C.

Ansgar and Evelyn met at CLBI when Evelyn told him he should be sure to butter his toast “right to the edges”. They found they had much in common even though Ansgar was a country boy and Evelyn was a city girl from Edmonton. They were married in 1949 and began to farm with Ansgar’s father in Tilley, AB. After 8 years, they decided to pursue a new path and moved to Calgary where Ansgar enrolled in university while working and helping to parent three young children, Irene Anne, Cathy, and James. During this very busy time, another child, Dagne, was born. Ansgar not only took classes at the University of Calgary, but summer sessions at the Banff School of Fine Arts. To save money, he stayed at campgrounds (only two weeks at a time, so he rotated between them) and rode his bike to classes, up and down mountain roads.

Ansgar taught school for 12 years, and during this time, their last child, Janice was born. He then found a very fulfilling career with the Bethany Care Society. He worked in various roles from Maintenance to hands-on resident care. His aptitude for the work, happiness with the organization, and love for the people he worked with radiated from him as he interacted with and cared for the seniors. He was known for his happy whistle as he came down the halls and applauded for the beautiful displays he was keen to create for various holidays or special events, like the Calgary Stampede.

His love of nature and farming roots lead him and Evelyn to purchase a recreational property near Bassano, AB in 1981 which he named the “Wild Rose Farm”. This acreage was the source of many wonderful memories, some of which included family visits, tractor and dirt bike rides for grandchildren, hosting many friends for parties and celebrations, campfires, Thanksgiving feasts, reunions, and lots and lots of gardening (much of the produce was donated to the Mustard Seed Charity). The Wild Rose farm was also the home base for many recreational activities such as fishing, frisbee, badminton, swimming, picnicking, cycling, exploring provincial parks, and many others. Ansgar loved to have fun. If he could get on a dirt bike, a train, a plane, even a helicopter, he was on top of the world.

Ansgar had a broad interest in many activities. He volunteered for various roles in the church, from Sunday School teacher to church council, and also in the community. His children were fortunate to have a father who was interested and involved in their extra-curricular activities, attending choir concerts, ball games, youth group events, or canoe trips, to name a few. He was a keen historian and an avid reader, always up to date on current affairs and the news from around the world. During much-loved and frequent Sunday drives with Dagne, he could point out historical sites and points of interest and would often have a story to tell about these local attractions. He was very creative – a painter, sculptor, woodworker, singer, writer, and he had a huge appreciation for all of the arts. In the year prior to Covid-19, he attended the Rosebud Theatre, The Jack Singer Concert Hall, and a Christmas concert featuring the Festival Chorus (of which he and Evelyn were once members). Up until recently, he and Evelyn had seasons tickets with some of their children to attend Theatre Calgary.

Sports and fitness were also important to Ansgar. He loved to swim (and taught many of his children to swim in Sylvan Lake), ski, hike, camp, cycle, and cheer on the Flames and the Stampeders. Special pets had a big place in Ansgar’s heart as well. He was an animal lover through and through. One of his favourite places to visit was the Calgary Zoo where he got a real kick out of the monkeys and gorillas.

Ansgar had a heart for people and a love of life and family; he was generous, hospitable, caring, trusted and honest. He loved going out in the community and taking it all in, whether it be the Calgary Stampede, a church picnic, a country drive, or just watching the planes come in at the airport. He and Evelyn hosted numerous family reunions at Kananaskis Lodge, and family always brought a smile to his face.

Ansgar and Evelyn found great joy in travelling and exploring the world together, from their first big trip to Oberammergau to their favourite and most meaningful tour of the Holy Lands. Many cruises and sunny destinations to escape winter for a few weeks were also on the agenda. They scarcely got back from one trip when they were planning and looking forward to the next one. The pictures taken and stories remembered from these trips provided many hours of reminiscing and enjoyment.
Ansgar’s faith was especially important to him, both in the comfort and joy he felt upon hearing and reading the word of God, and in ministering to others through teaching and example. His faith carried him through many of life’s hardships and helped him to conquer challenges experienced in childhood, adulthood, and old age.

If family and friends so desire, memorial contributions in Ansgar’s honour may be made to Camp Kuriakos at Sylvan Lake.

"Come away... and rest awhile" Becoming Gardeners of Heaven's Realm