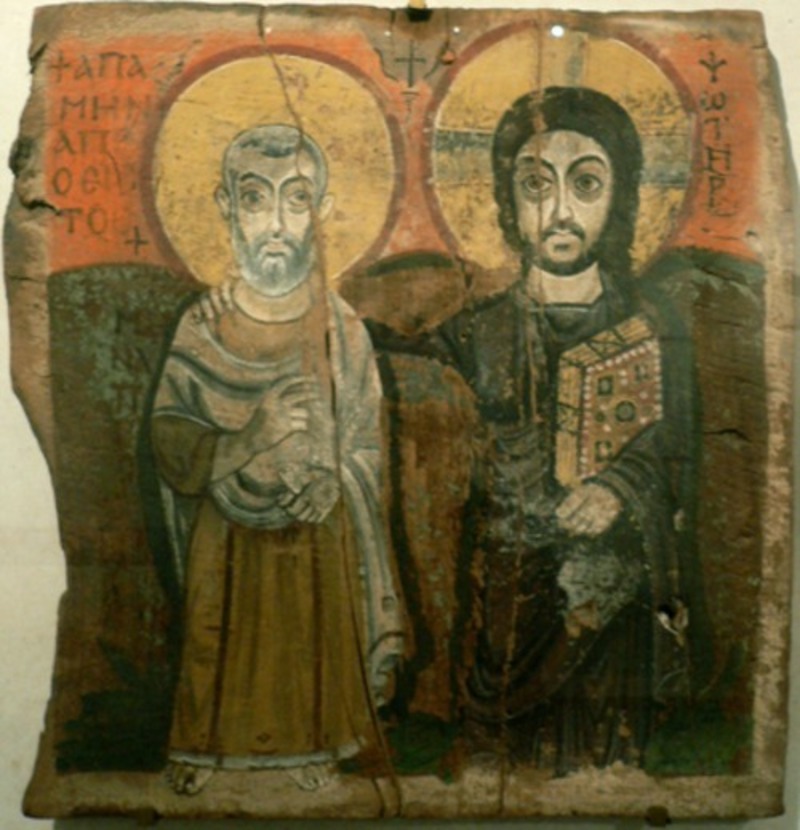 "New Year's Resolutions from the Desert Fathers and Mothers"

Some say “good riddance” to the year past, with all its trials and hardships. There’s a Netflix mockumentary called “Death to 2020.” But I’d rather not take that attitude. Instead I think it would be gentler to ask what gifts the past year brought us, even through all its tremendous challenges. It’s rarely helpful to paint people or events with a black and white brush, labelling as “good” or “bad.” After all, our readings for today tell us that wisdom, God’s word, is present in all people, every time, and throughout creation.

Over waves of the sea, over all the earth, and over every people and nation I have held sway, says Wisdom in the book of Sirach.
[The Word] was in the world, and the world came into being through him, says John’s gospel.

And so I think that rather than hastily chucking all of 2020 into the waste, it would be better to ask where we could find wisdom through our experiences of the past year.

And while we’re at it, we could ask ourselves how we could embody wisdom in the year to come. That’s what New Year’s is for, after all. Taking stock of the past and creating intentions for the future. Gathering and sifting our experiences past, gleaning what pearls we can, and taking them to market for profit in the year to come.

It’s what we do right now. The month of January, after all, is named for Janus, the Roman god of beginnings and transitions, doors and gates. He has two faces, one looking back and one looking forward.

I don’t want to offer a big summation of Lessons Learned from 2020 – you’ll need to do that for your own unique situation. But for a sermon today I’d like to offer up some resolutions for you to consider for 2021. These are pearls of great price, perennial pieces of wisdom from a tradition that goes back to the Egyptian deserts of the early years of Christianity, the third and fourth centuries.

This was the time of the desert fathers and mothers, men and women who retreated from the world to pursue lives of prayer and holiness in the stark desert environment. They were not interested in religion as a set of ideas or beliefs; they were interested in religion as a practice. Through prayer and fasting, meditation on the Word and acts of service to the neighbour, they pursued the transformation of their hearts, healing, and spiritual growth. They called themselves athletes of the spirit. (Which, the Greek word for athlete is ascetic.)

I discovered the writings of these extraordinary men and women when I was in seminary. I was up to my eyeballs in theology, biblical studies, and the theory of pastoral practice – immersed in the world of ideas. But when I picked up a book of the sayings of the Desert Fathers and Mothers I was grounded again in the practice of faith. These people were relentless in their pursuit of wisdom. They wanted to live a compassionate, whole, and integrated life in alignment with God’s will and God’s ways, and they were absolutely committed to the path. They looked for the ways in which the Word could become flesh anew, in their own lives of discipleship.

Sometimes their sayings and actions come across to us today as strange or oddball. But in every case there is method in what sometimes appears to us as their madness. We shouldn’t be surprised. After all, as John declares, [The Word] was in the world, and the world came into being through him; yet the world did not know him. He came to what was his own, and his own people did not accept him.
We don’t always recognize the good, the true, the beautiful, or the wise when we first see it. The desert monastics ask us to consider who is crazy: them or the world that judges them.

So with that introduction, here are some resolutions for 2020, brought to you by the Desert Fathers and Mothers.

Resolution 1. Never stop starting over.
“Abba Poemen said regarding Abba Prin that every day he made a new beginning.”
“My God, do not abandon me. I have done nothing good before Thee, but grant me, in Thy compassion, the power to make a start.” (Abba Arsenios)

Resolution 2. Live intentionally, not aimlessly.
“Think nothing and do nothing without a purpose directed to God. For to journey without direction is wasted effort.” (St. Mark the Ascetic)

Resolution 3. Never, ever despair, no matter what.
“Let us eagerly draw near to Christ, and let us not despair of our salvation. For it is a trick of the devil to lead us to despair by reminding us of our past sins.” (St. Makarios of Egypt)
“When someone is defeated after offering stiff resistance, he should not give up in despair. Let him take heart, encouraged by the words God raises up all who are bowed down (Psalm 145:14). Do all in your power not to fall, for the strong athlete should not fall. But if you do fall, get up again at once and continue the contest. Even if you fall a thousand times… rise up again each time.”
(St. John of Karpathos)

Resolution 4. Pray simply, not stupidly.
“Often when I have prayed I have asked for what I thought was good, and persisted in my petition, stupidly importuning the will of God, and not leaving it to Him to arrange things as He knows is best for me. But when I have obtained what I asked for, I have been very sorry that I did not ask for the will of God to be done; because the thing turned out not to be as I had thought.”
(Evagrios the Solitary)
“Abba Macarius said, ‘It is enough to say, Lord, as you will, and as you know, have mercy. And if the conflict grows fiercer, say: Lord, help!’”

Resolution 7. Stay put.
Mother Syncletica said, “If you find yourself in a monastery do not go to another place, for that will harm you a great deal. Just as the bird who abandons the eggs she was sitting on prevents them from hatching, so the monk or the nun grows cold and their faith dies when they go from one place to another.”
In Scetis a brother went to Moses to ask for advice. He said to him, “Go and sit in your cell, and your cell will teach you everything.”

Resolution 8. Celebrate theological modesty.
“St. John Chrysostom says that we do not know wholly even what is given in part, but know only a part of a part.”(St. Peter of Damaskos)

Resolution 9. Acknowledge my brokenness.
“The person who has come to know the weakness of human nature has gained experience of divine power. Such a person never belittles anyone… He knows that God is like a good and loving physician who heals with individual treatment each of those who are trying to make progress.”(St. Maximos the Confessor)
A brother said to Abba Theodore, ‘Speak a word to me for I am perishing.’ Sorrowfully, the old man said: ‘I myself am in danger. So what can I say to you?’

Resolution 10. Be ruthlessly realistic.
Saint Anthony said to Poemen, “Expect trials and temptations until your last breath.”
“I am convinced that not even the apostles, although filled with the Holy Spirit, were therefore completely free from anxiety. . . . Contrary to the stupid view expressed by some, the advent of grace does not mean the immediate deliverance from anxiety.” (St. Makarios of Egypt)

Resolution 11. Always think good of everyone.
“Show the greatest gentleness toward all people” (Evagrios the Solitary)