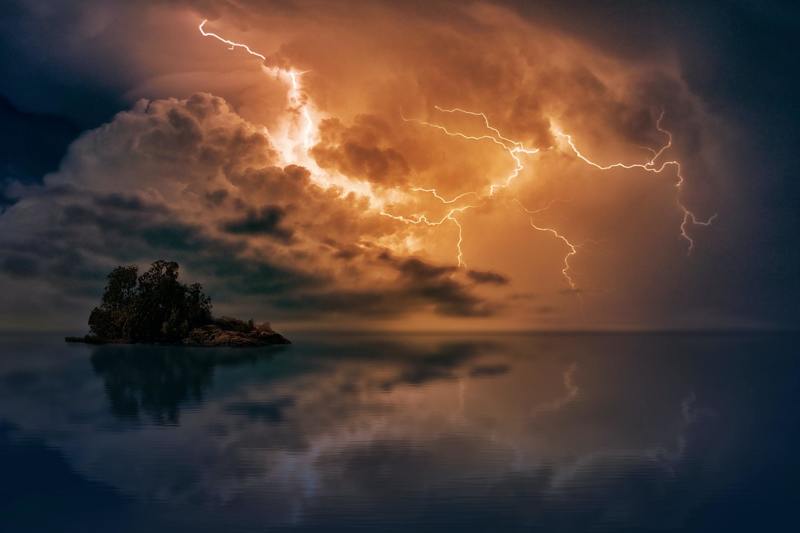 "The Heavens were Torn Apart"

It had to be terrifying, don’t you think? I mean, as Jesus came up from the water he witnessed the heavens torn apart. Can you imagine what that looked like? Felt like to see it happen? To me this is something beyond just the clouds parting and a beam of sunlight coming down through. We’ve all seen that kind of thing before; it’s a very natural occurrence. But this says the heavens themselves were torn apart. It’s like a rip in the very fabric of reality itself and the uncreated light of God spilling through.

The Greek word Mark uses is skhizein. As in schism, and schizophrenia. A schism happens when groups of people disagree so strongly that they can’t be in relationship anymore. Schizophrenia is a condition of having, literally, a “torn mind”. And when Jesus was baptized in the Jordan by John he experienced the heavens skhizomenous - torn apart. This is a dramatic and powerful word.

When Jesus saw the fabric of reality torn apart—a traumatic, terrifying moment—he must have realized nothing could ever be the same again. This was the moment he heard the Voice of the LORD declare him a beloved child. How could anything be the same after that?

Mark tells us that Jesus began his ministry with the experience of skhizomenos, and he continued with it in everything after that.

·      When he leaves the Jordan after his baptism he immediately begins proclaiming: “The kingdom of God is near; repent and believe the good news.” This message is a tearing apart of the status quo; it calls for decision and action.
·      As he walks by the Lake of Galilee, four men hear his message and it tears them from their homes and families; they are drawn irresistably to follow Jesus.
·      It is not long before they encounter people possessed by demons; again Jesus tears apart the chains that bind.
·      Next he eats with sinners and tax collectors, tearing up his culture’s ideas of clean and unclean.
·      At every step Jesus tears up the religious rulebook when it leads to callousness instead of compassion.
·      When the people begin to acclaim him as a messiah, he tears up their ideas of what that means: not one who comes with greater power to kill and destroy, but one who models love.
·      In his last days, when Jesus is in Jerusalem, he enters the temple and tears down the tables of the money-changers, a business that had come to bar people from God.
·      It is the last straw. The authorities finally move to tear his life from him by hanging him on a cross.
·      At the moment of his death, the curtain of the temple is literally torn in two, from top to bottom. Do you know what was depicted on this 80-foot high piece of fabric, this giant tapestry? The heavens. The heavens were again torn in two.
·      And when God raises Jesus from the dead, even the boundary between life and death is torn up forever.

The baptism of Jesus is like this. It tears up the status quo of life in this world and calls those who experience it into a new way of being.  For those who have heard the Voice of God saying, “You are my beloved child,” nothing can ever be the same again. To hear in the deepest part of one’s being is to experience skhizomenos. It is to be torn away forever from the habits and patterns of culture and world. It must involve us in a life of joy and peace and compassion for all. It must propel us into tearing up every chain that binds us and every human around us. It must cause us to question every voice that does not speak of love. We might find ourselves torn from old ways and old relationships that do not free and build us up. To be baptized is to know schism.

Now I know that for most of us baptism as we’ve actually practiced and experienced it, is a tidy ritual that takes place with much cooing and many smiles. It’s a tame initiation rite into an organization that often has not really demanded much in the way of an alternative lifestyle. For so much of the history of the church, baptism has been regarded as “fire insurance”, a due you pay and then don’t think about again, a sign of one’s membership in an exclusive club, the club of the saved.

But for today can we tear up that tame and tidy version of baptism that we are familiar with? Can we get a glimpse of its revolutionary implications for our own lives and the life of the world around us? Can we begin to see how baptism forms us for an alternative lifestyle, committed to forgiveness, solidarity with humanity, compassion for all people, and justice for the marginalized?

Grant Gallup, an Episcopal priest from Nicaragua and Liberation theologian, challenges us:

Your Baptism means that you are committed to God's brand of justice, it means you've accepted appointment as an agent and an asset to revolutionary change, and it means you've accepted immersion in, solidarity with, all the changes necessary to create a truly human future.  Jesus didn't have to be baptized, and neither did you.  But he accepted it, and you have accepted it, to fulfill all justice possibilities.  And you have accepted it on exactly the same terms.  By becoming a baptized person, Jesus opted for a lifestyle of sharing, of being a healer in the lives of others, not a destroyer or a menace to the lives of others.  A giver, not a taker.

Friends, let us become, like Jesus our Lord, tearers up of a status quo that is death. Let us renew the promises and commitments we made in the waters of baptism. Let us take up the project God is already doing of tearing up this world so that heaven might shine forth and be revealed, once and for all humanity.

Photo by Johannes Plenio on Unsplash