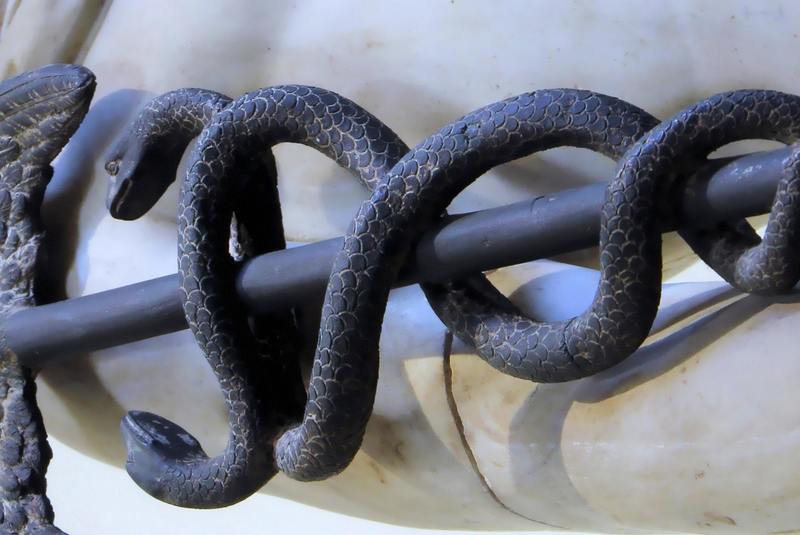 We’ve been exploring this story in the Sundays of Lent this year. Through Noah we learned that the covenant begins with a relationship of care for the earth and all living creatures. From Abraham and Sarah we found that God’s intention is for blessing, even in the midst of our doubts and struggles. With Moses we discovered a way of life expected for people of the covenant, one that can be summarized in a single rule: Love the Lord your God with all your heart, mind, and soul; and love your neighbour as yourself. Today we explore an act of healing for God’s people in the wilderness, an act that points us toward the covenant’s fulfilment in Jesus and the cross.

The story we heard this morning, wonderfully narrated by Kyle and beautifully illustrated by Hope’s children, reminded us of the experience of Israel in the wilderness. They had been led out of Egypt to freedom; they had been given the gift of the Ten Commandments; they had been provided manna and quail to eat, and water from a rock to drink. Yet still they managed to focus on what was missing, still they wished for something else. (Doesn’t that ring so true to human nature? We so often want what we do not have, and miss the gifts that are right in front of us.) What the people of Israel wanted was the rich food they thought they remembered eating back in Egypt – delicious meat stew! And so they raised their voices in bitter complaint against Moses and against God. “Why have you brought us up out of Egypt to die in the wilderness? For there is no food and no water, and we detest this miserable food.”

Of course their complaint, and their hankering for the slavery of Egypt, represents something much bigger. The people are nostalgic for a whole way of life of their past, one that they think was simpler and better than what they have. It’s a withdrawal from the responsibility of living in the present, and the obligations to community that come with their freedom. Wouldn’t it be better, they think, if we could just do what we were told, get our wages, and leave the power and responsibility to someone else? (Again, this feels to me so true to human nature. How often do we attempt to avoid responsibility in our lives, pinning blame for our lot on other people, circumstances, or God?)

What happens next in the story was not told in the children’s version illustrated earlier. What happens next is that a horde of poisonous snakes slithers into the midst of the people. Many are bitten and many die. Like the manna and the water and the meat stew, the snakes are symbolic; they are the embodiment of the people’s own ingratitude, nostalgia, fear, and despair. The story tells us that these things, left untreated, can run rampant in our lives and have deadly consequences. Refusing the actual gifts of God in the present moment, we can become bitter and curved in on ourselves, eventually unable to see or appreciate the good. Backward-looking nostalgia is the opposite of forward-moving faith, and it can trap us in fantasy, leaving us unable to manage the real. Fear and despair are normal feelings that come upon us from time to time, but if we are not careful they can also become habits of minds that have become closed to the promises and gifts of God, blind to hope.

The snakes are deadly, but God provides a cure. It is, mysteriously enough, an image of one of those very snakes done in bronze and hoisted on a pole. The people are instructed to look to it whenever they are bitten and they will be cured. By this means the God of the covenant continues in faithfulness and mercy, always bringing healing and salvation.

Is the symbolism again not clear? Awareness and acknowledgment of the problem is the beginning of healing. To look at the serpent on the pole is to look in a mirror and know one’s need for change. It’s the confession that has to precede absolution. We move from fearfully scanning the ground for threats, to looking up in faith and hope. The look up to the serpent is the same spiritual movement as the modern Twelve Steps: We admitted we were powerless… came to believe that a Power greater than ourselves could restore us… made a searching and fearless moral inventory of ourselves… admitted to God, to ourselves, and to another human being the exact nature of our wrongs… humbly asked God to remove our shortcomings.

And the God of the covenant does. Again and again. From the Israelites who looked up to the serpent on the pole, to the modern participants in 12-Step programs, to anyone who is willing to make the same spiritual movement. By this means God heals and restores, and testimonies to God’s mercy in this regard abound.


Nicodemus, the prominent religious leader, comes to Jesus by night to seek teaching and enlightenment who this prophet from Nazareth really is. And Jesus tells him who he really is and what he does by reference to the story we’ve been meditating on. Just as Moses lifted up the serpent in the wilderness, Jesus says, so must the Son of Man be lifted up, that whoever believes in him may have eternal life.

Jesus is telling Nicodemus that he is going to suffer the consequences of human sin – all our bitterness, selfishness, ingratitude, envy, fear, anger, and so on. He’s going to be “lifted up” on a cross as an image or icon of the consequences of sin. And because of that he will become a symbol and instrument of healing for all who look to him.

As Jesus invited Nicodemus, he invites us to look to him lifted up as an image of how God transforms all our suffering and sin into healing and eternal life. He is an image of the covenant fulfilled.

For God so loved the world that he gave his only Son,
so that everyone who believes in him may not perish
but may have eternal life.
Indeed, God did not send the Son into the world to condemn the world,
but in order that the world might be saved through him

Behold the life-giving cross,
on which hung the Savior of the whole world.
Oh, come, let us worship him.
We glory in your cross, O Lord,
and we praise your holy resurrection,
for by your cross joy has come into the world.