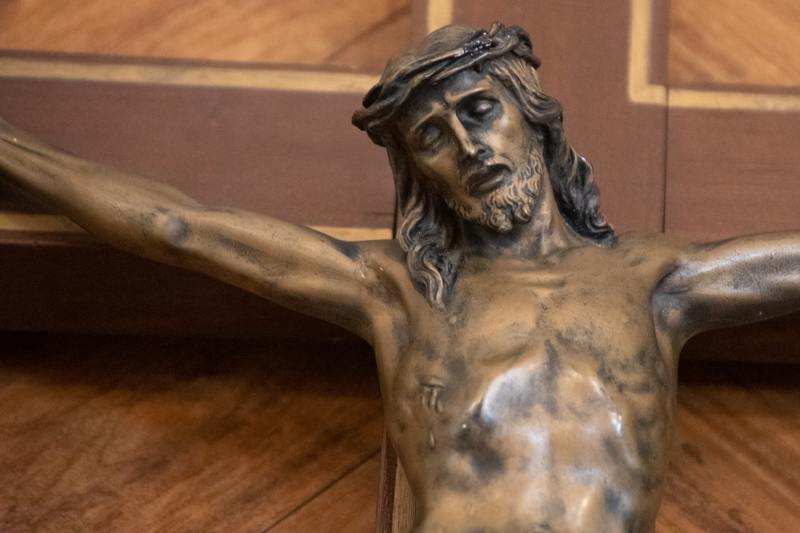 “Father, forgive them, for they do not know what they are doing.”

Do you ever watch superhero movies? I do. They’re always big, fun, and flashy. Everything is over-the-top in a superhero movie. The hero is always the biggest, fastest, strongest, most beautiful, luckiest, or just most charming person around. Or all of the above. The plot in a superhero movie is always filled with action and the stakes are the highest imaginable: the life or death of a whole city of citizens, the world, or even the entire universe—it rests on the hero’s shoulders. Some of my favourite superheroes are: Captain Marvel, Thor (especially in Thor Ragnorok), Dr. Strange, and any one of the several Guardians of the Galaxy, especially the super-straightforward, super-literal-minded strong man Drax. Every superhero has a special quality that makes them super. Drax is strong and fearless. Dr. Strange is a wizard. Thor has a magic hammer. And Captain Marvel - well, she can do anything. I think she’s more powerful than Superman.

If the exponential growth of the Marvel Cinematic Universe in the past 20 years is any indication, with the millions upon millions of dollars they can pour into their movie productions, we love our superheroes. Just as the ancients loved to tell stories of the gods we love to tell stories of our superheroes, stories in which goodness and truth and justice and righteousness and reconciliation prevail in the end. The superhero is someone who, by superior strength or intelligence or cunning or skill brings about some kind of reign of peace in the end. Sure, the villains always put up a fight, but they always meet their demise in the end, always in some poetic and appropriate way. In these stories we are comforted to know that by the power of a superhero, the world can be set right in the end.

Today we celebrate Jesus as Rex Gentium, King of the Nations. Does that make him a kind of real-world superhero? Is he bigger, badder, and better than any of his competitors, any of the villains of violence in our world? Is that why we celebrate him as King today?

If so, the lectionary gives us a pretty peculiar picture of our King, our superhero of superheroes. Today we linger on the picture of Jesus hanging on a cross beside two other men who have also been condemned by the state as terrorists. He is suffering and helpless. People are mocking him. He is soon to die an agonizing death. This scene is not an advertisement for Jesus’ power.

Yet we still proclaim him as King, Messiah, and the Chosen One of God, the one who breaks the bow and shatters the spear, and burns the shields with fire. We exalt him among the nations and lift up his name in all the earth. So let’s grant that he’s some kind of superhero. But what kind? If he is a superhero, what is his super power?

How about forgiveness? Because as Luke tells it, there he is being tortured and humiliated by his enemies, and he manages to pray, “Father, forgive them; for they do not know what they are doing.” I’d say that’s a pretty super-heroic thing to be able to do.

Yet, this is not a power that you ever see celebrated the Marvel comic universe; there is an Iron Man but there is no Forgiveness Man. But wouldn’t that be great to see? Imagine the tag lines:

“Forgiveness Man: making friends out of enemies with a single word!”

And this is Jesus, of course. Never to be made into an athletic, tight-suit wearing Marvel superhero, but celebrated for all time in the gospels. He freed the captive, healed the sick, reached out to the last, the least and the lost, welcomed the outcast, stood up for truth, and challenged injustice. He loved. He forgave. He showed the way to a world of peace, all peoples reconciled to God and to one another.

And we killed him for it.

We didn’t want that kind of leader. We wanted a Marvel superhero who would win out with superior force and smite his enemies (who would also be our enemies). We wanted a world of good guys and bad guys, with ourselves, of course, cast in the role of good guy. We wanted victory, and glory, and wealth, and power.

But Jesus will not be that kind of king, or superhero. He will not perpetuate the endless cycle of violence in our world by being the biggest, baddest, and strongest hero on the block, no matter how righteous a hero  he seems to be. Because he knows that domination, coercion, and force will only beget resistance and more violence. So very unlike any Marvel superhero that ever was, he will not take vengeance in any way, shape, or form. He will only forgive, because he knows that’s the only way forward or out.

Jesus prays, Forgive them, for they do not know what they are doing.

Photo by Dawn McDonald on Unsplash