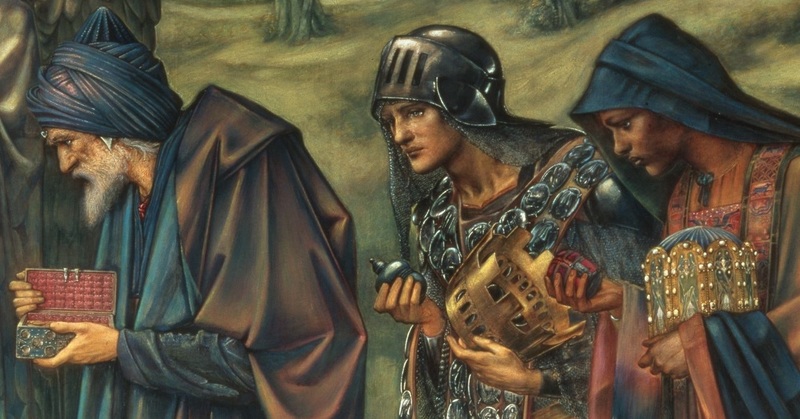 " 'Beware of beautiful strangers'," said one of the magi-astrologers, the wise men, "and on Friday avoid travel by water. The sun is moving into the house of Venus so affairs of the heart will prosper.' We said this to Herod, or something along those lines, and of course it meant next to nothing. To have told him anything of real value, we would have had to spend weeks of study, months, calculating the conjunction of the planets at the precise moment of his birth and at the births of his parents and their parents back to the fourth generation. But Herod knew nothing of this, and he jumped at the nonsense we threw him like a hungry dog and thanked us for it. A lost man, you see, even though he was a king. Neither really a Jew nor really a roman, he was at home nowhere. And he believed in nothing, neither Olympian Zeus nor the Holy One of Israel, who cannot be named. So he was ready to jump at anything, and he swallowed our little jingle whole. But it could hardly have been more obvious that jingles were the least of what he wanted from us.

" 'Go and find me the child,' the king told us, and as he spoke, his fingers trembled so that the emeralds rattled together like teeth. 'Because I want to come and worship him,' he said, and when he said that, his hands were still as death. Death. I ask you, does a man need the stars to tell him that no king has ever yet bowed down to another king? He took us for children, that sly, lost old fox, and so it was like children that we answered him. 'Yes, of course,' we said, and went our way. His hands fluttered to his throat like moths.

"Why did we travel so far to be there when it happened? Why was it not enough just to know the secret without having to be there ourselves to behold it? To this, not even the stars had an answer. The stars said simply that he would be born. It was another voice altogether that said to go - a voice as deep within ourselves as the stars are deep within the sky.

"But why did we go? I could not tell you now, and I could not have told you then, not even as we were in the very process of going. Not that we had no motive but that we had so many. Curiosity, I suppose: to be wise is to be eternally curious, and we were very wise. We wanted to see for ourselves this One before whom even the stars are said to bow down - to see perhaps if it was really true because even the wise have their doubts. And longing. Longing. Why will a man who is dying of thirst crawl miles across sands as hot as fire at simply the possibility of water? But if we longed to receive, we longed also to give. Why will a man labor and struggle all the days of his life so that in the end he has something to give the one he loves?

"So finally we got to the place where the star pointed us. It was at night. Very cold. The Innkeeper showed us the way that we did not need to be shown. A harebrained, busy man. The odor of the hay was sweet, and the cattle's breath came out in little puffs of mist. The man and the woman. Between them the king. We did not stay long. Only a few minutes as the clock goes, ten thousand, thousand years. We set our foolish gifts down on the straw and left.

"I will tell you two terrible things. What we saw on the face of the new-born child was his death. A fool could have seen it as well. It sat on his head like a crown or a bat, this death that he would die. And we saw, as sure as the earth beneath our feet, that to stay with him would be to share that death, and that is why we left - giving only our gifts, withholding the rest.

"And now, brothers, I will ask you a terrible question, and God knows I ask it also of myself. Is the truth beyond all truths, beyond the stars, just this: that to live without him is the real death, that to die with him is the only life?"