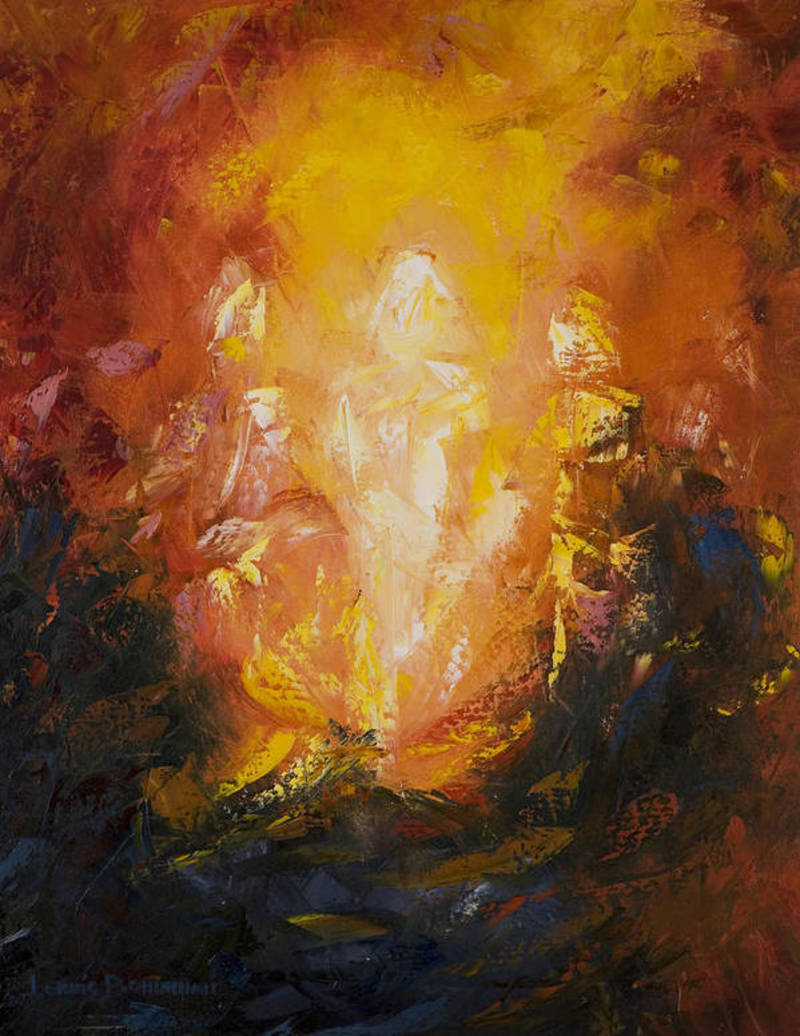 Grace and peace to you, friends in Christ! I wanted to accompany my sermon with images this week, so I’m coming to you in this way – on screen!

In 1827 astronomers looked into the night sky and saw an unusual sight. A star was there, where previously there had been nothing. Over the next ten years the star increased in brightness until it became the second brightest object in the heavens. And then it was gone, leaving astronomers to wonder and theorize.

The star, however, had not disappeared entirely. With telescopes, especially powerful modern ones, it is still visible and available to study. It’s called Eta Carinae, and you can see a picture of it beside me. NASA says, “Using a combination of image processing techniques, astronomers created one of the highest resolution images of an extended object ever produced by Hubble Space Telescope.” A contemporary astronomer recently described what happened to Eta Carinae,from 1827 to 1835. “It was as if for that brief decade the outer envelope of the star was peeled back, allowing all that energy within to radiate outward in a flash.” (Unknown source)

When Jesus met on the mountain top with Moses and Elijah, the embodiment of the all the Law and the Prophets, it was as if the outer envelope of his humanity was briefly peeled back, allowing the divine light within to radiate outward in a flash for Peter, James, and John to see.

Our text records that they were terrified by the experience.

Icons that portray the event show Christ in dazzling white clothing with the perfect circle of eternity and divinity surrounding him. Rays of light shine forth with an almost-physical presence, and Peter, James and John are shown sprawled out on the ground as if they have been hit by a stellar supernova explosion. Everything is in confusion: Peter begins to babble, the cloud that always signifies the presence of God descends over everything, and the disciples fall to their faces, certain the end has come. But instead they hear a Voice, tender and gentle, addressing them. “This is my beloved Son,” it says, “Listen to him!”

“Meanwhile, down in the valley below a boy writhes in the dust. He drools, he cannot hear, and his eyes – wide-open – see nothing but darkness. Around him a crowd gathers, eager for spectacle. Scribes jeer, and disciples wring their hands in shame. “Frauds!” someone yells into the night. ‘Charlatans!’  ‘Where’s your master?’ they ask the disciples for the umpteeth time. ‘Why has he left you?’ ‘We don't know,’ the disciples mutter, gesturing vaguely at the mountain. Panic wars with exhaustion as they hear the boy shriek yet again. He flails, and his limbs assault his own stricken face. An anguished voice rends the night. “This is my son!” a man cries out as he pushes through the crowd to gather the convulsing boy into his arms. Everyone stares as the father cradles the wreck of a child against his chest. “Please,” he sobs.  “Please. This is my beloved son. Listen to him.”[1]

This is really the story of two transfigurations. Jesus on the mountaintop is transfigured by LOVE and we get a glimpse of the shining glory that lies within. In the valley a little boy is transfigured by all the hate and wretchedness of the world and we see the suffering it produces in his being.

And then the mountain meets the valley. Jesus, who has been transformed by his Father’s love now with a single word rebukes all the hate and despair and violence and lies of this world… and heals the boy!

Transfigures him into what he always was: a being created and loved by God, renewed and shining forth with God’s image.

It is always said that mountaintop experiences are for the mountaintop; you can’t take them with you. This is a mountain top I visited last summer, up near Bow Lake. I hiked up there in the morning, when the temperature was just right – neither too hot nor too cold. I had my lunch on this ledge overlooking the valley and the path I had hiked up and soaked up the sun for a while. But then it was time to go. I had a commitment I had to get to so I hoofed it fast back down the mountain to the valley below. Whether it’s actual mountains like this or the metaphorical “mountaintop” moments of our lives, they say you always have to come down; you have to live your life mostly in the valley.

But I wonder if this is really so. Jesus took his mountaintop with him and transfigured all whom he met with his Father’s love flowing through him. Can it not also be so for us, his disciples? Can we not find ourselves transfigured by an encounter with God, and take that with us to transfigure in turn the world around us?

This week I asked people if they had ever met someone whose face shone like the sun. (Like Moses, like Jesus in our stories.) The answer was pretty much universally Yes! Everyone has met someone whose face shone. It was a grandparent in whose company you always felt safe. It was a friend who always had a quiet, gentle, and loving word to speak. It was a revered person of faith who had a caring and peaceful presence about them. We’ve all encountered such people. We feel accepted by them. We’re at peace in their presence. Their faces shine. These are the people who have brought the mountaintop of encounter with God into the valley of the world where we all live.

The story says that after the Voice had spoken to Peter, James and John on the top of the mountain; after the cloud of God’s presence had passed, they looked up, trembling, and saw no one but Jesus alone.

These words have far more significance than just that they didn’t see Moses and Elijah there anymore. Rather, in a much more profound way, from this time forward they had eyes only for Jesus. They had seen his true nature and now in all things they would see Jesus alone.

Jesus has promised to meet us in the poor, the suffering, the hungry, the stranger, and the outcast. May we, his church, have eyes only for him in all these, the least of his brothers and sisters. May we be so transfigured by his love that we in turn transfigure all the world around us – from hate to love, illness to healing, despair to hope, and death to life.

In the name of the crucified and risen one, Jesus Christ our Lord,
Amen.