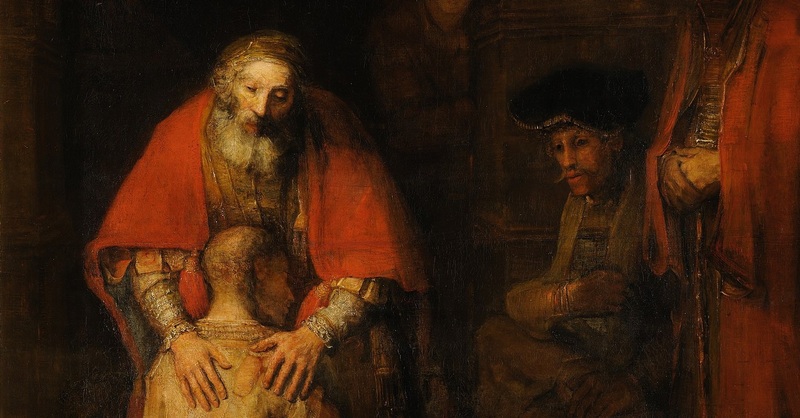 “This man welcomes sinners – and eats with them!” complained the religious people. They were at a dinner together and the religious people didn’t like the way Jesus seemed to ignore distinctions of who was righteous and who was not…
In response, Jesus told three stories, the most famous of which was the final one about the Prodigal Father.

This is a story about a father, a crazy, loving father whose extravagant will is to forgive, reconcile, and ultimately raise to life his lost sons. This is the story of a Prodigal Father.

What an unusual father he is! Especially for the ancient world. Especially for a traditional culture. Here are some of the virtues of a wise or a great man, according to Aristotle:
He does not take part in public displays...
He is not fond of talking...
His carriage is sedate, his voice deep, his speech measured; he is not given to hurry, for he is concerned about only a few things;
He bears the accidents of life with dignity and grace
He… takes delight in privacy
-       Aristotle, Nicomachean Ethics

It’s a picture of a patriarch that is still upheld today. Once I was reviewing a book on parenting by the famous Christian author, James Dobson. Now, you might know that Mr. Dobson advocates for what could be called a “traditional” view of the family. A father in his ideal is very similar to what Aristotle, the ancient Romans, and the Jews also valued: a strong man who maintains his primary place of authority in the family through strict (yet loving) discipline. Boundaries are enforced through judicious use of rewards and punishments. The father upholds the morality of the home and is honoured and respected by all.

Does any of this sound like the father of Jesus’ story? (No!)

In fact, the Prodigal Father is absolutely out to lunch, by the standards of the traditional family. His boundaries are fuzzy. His discipline is lax-to-non-existent. He is weepy and emotionally demonstrative. He seems not to know about the importance of rewards and punishments. By all social standards this guy is as much of a shameful disgrace as the “tax collectors and sinners” who gathered so avidly around Jesus. And the worst of all is that Jesus implied: this is what God is like! Not the traditional patriarch, but this Prodigal Father is an image of God.

“Dad, give me my share of the inheritance!” says the kid. He might as well have said, “Dad, drop dead,” because he’s asking for what normally would be distributed at the time of the father’s death. The amazing thing is that the old man does! “Okay kiddo,” - just like that. (See what I mean about fuzzy boundaries and lax discipline?) It’s as if all the material possessions in the world mean nothing to him compared with having a relationship with his son. And the boy, having just said “Drop dead,” has pretty much killed him already anyways. What could land and wealth mean to him anymore?

You have to remember, too, that the setting of this story is rural first century Israel, where land is a sacred inheritance from your ancestors, held in trust for future generations – a gift of God never to be squandered. When he liquidates half his estate and hands it over to a son who then disappears to a foreign land, the shame he brings on himself in the eyes of his community is another kind of death. The great preacher Barbara Brown Taylor imagines the scene:
The “for sale” sign is not up very long, apparently, but long enough for everyone in town to see it. What kind of patriarch cannot prevent his son from carving up the family farm? Does the boy have no shame? What is a bag of money, compared to land that has fed his ancestors for generations? When people see the father in town, they do not know whether to shun him or feel sorry for him. Because they cannot decide, they stop inviting him to their parties, but he does not look like he is in the mood for a party anyway.

It is as if his son has died, and after a while people stop talking about whose fault that is. The father is still part of the community, and the community protects him. The only way that boy of his is ever going to step foot back inside that town is to come back ten times richer than he left, with fabulous presents for every member of his family and enough left over to buy back the farm. Then he will have to throw a banquet and invite the whole community, honoring them as extravagantly as he shamed them when he left.
-       “The Parable of the Dysfunctional Family,” 17-Apr-2006


So the father dies right of the top of this story. He dies again in the middle when he sees his son coming “when he is still far off.” (I mean, what has this man been doing with his life all this time? Just sitting on the front porch gazing down the road, I guess.) He dies when he ditches all sense of honor and dignity to run out in the sight of all the village, and welcome his son home. What did Aristotle say about a great man? “His carriage is sedate… he does not take part in public displays.” Right. In other words, real men don’t pick up their skirts and run weeping like a girl out to their pathetic homecoming sons. They stay strong. They let others come to them. They teach a stiff lesson to headstrong boys. Not this father. Social convention and status are nothing to him beside having his boy back in relationship. He’d rather die than keep that kind of dignity but stay alienated from his son.

There’s another death in throwing that feast for the son who comes home, another moment when the father casts aside honour and social convention in order to create reconciliation. The whole village is invited, as implied by the killing of the “fatted calf.” Gifts are lavished on the son, but also on the guests, in order to restore the honour of the community that was so shamed by the son’s disappearance in the first place. “His son’s salvation costs him almost as much as his son’s abandonment of him in the first place, yet he never says a word about the price.” (Brown Taylor)

Finally I think the father dies yet again when his elder son refuses to come in to the party and shames his father. The man wants nothing so much as to have his children reconciled and home, and cares little for who’s in the right and who’s in the wrong. He’s willing even to die to his moral authority as patriarch if only the older son will come in, so he goes out—abandoning his guests—to plead with the elder.

So he goes out to his good son the same way he went to his bad one—only not running this time, because honestly, he’s worn out with these warring, wasteful children of his—of how little it means to them to belong to one another, of how much more interested they are in being fulfilled and fed, or blameless and right than they are in being reconciled with each other—as if securing their own identities were more important to them than living in peace with him and one another. (Brown Taylor)

The Prodigal Father dies over and over again because relationship means so much to him. Having his children home again and sharing in the family life of love is worth everything. Money, social status, and familial power – the things that constitute the very life of a patriarch – are all happily thrown overboard by this crazy prodigal father for the sake of relationship.

Now, the funny thing is, the beautiful thing is, the mysterious thing is,
even though the father keeps dying, he doesn’t stay dead. He just keeps rising up to continue interacting with his sons. Maybe you could say that in his death to all the things the world finds important, he finds real life, the life that never ends.

That life is symbolized perfectly in the feast the father throws for his reconciled son. The fatted calf is killed and the whole village is invited to the celebration. It’s the father’s deft political maneuver to ensure his son is restored to community before that community can pass their own harsh judgment. It’s a fairytale ending in which the lost is found, the sinner forgiven, and the outcast reconciled. It’s a celebration of love, joy and reconciliation that embodies what real life is all about.

The prodigal father of the parable is Jesus’ Father-God. Is our God. Jesus’ ministry was to “welcome sinners and eat with them.” Even so, this ministry of reconciliation has been passed on to us, as Paul says in his letter to the Corinthians:
if anyone is in Christ, there is a new creation: everything old has passed away; see, everything has become new! 18All this is from God, who reconciled us to himself through Christ, and has given us the ministry of reconciliation

May we ever more be found in the image of Christ our Lord, who ignored the world’s distinctions between righteous and unrighteous in order to be in loving relationship. May we be ever more conformed to the pattern of the Prodigal Father who died again and again to this world in order to raise, restore, and renew a lost humanity. Amen.