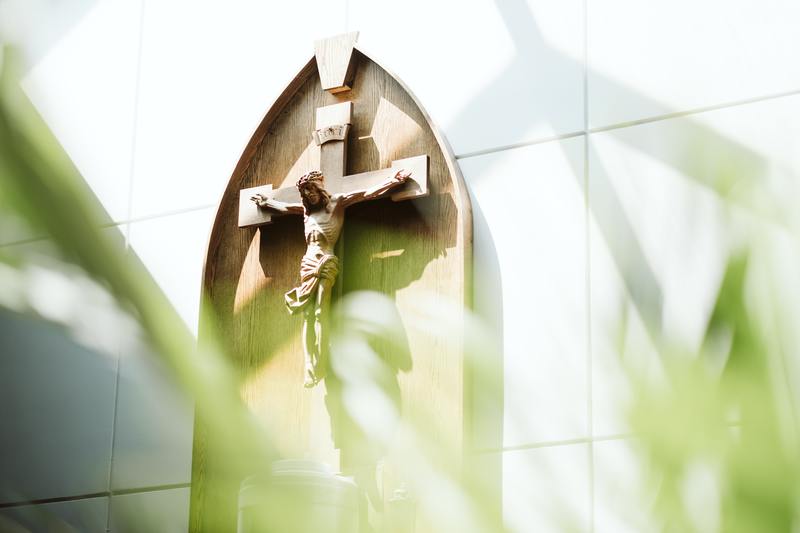 Another year, as holy week begins, we have beheld the Passion of Our Lord.
Which is to say that we have witnessed the hope and celebration of the procession into Jerusalem, the shared intimacy of the Last Supper, then the terrible betrayal on the Mount of Olives, the desolation of the arrest of Jesus, the fear and sadness of his betrayal by Peter, the injustice and cruelty of the religious and political authorities, and finally the unimaginable suffering and then death of Jesus on the cross.

Why dwell on this story? Why tell it every year in sacred ceremony?

I think just because it is the story of our world. In the Passion of Jesus we look squarely at the blindness, fear, ambition, hate, injustice, and callous cruelty that causes so much suffering in our world. We do not look away, and we do not excuse or justify any of it…

It is harrowing to look and keep looking, not only at the passion of Jesus, but at the passion of all those who continue to suffer violence in this world. We just want to retreat to our own worlds of denial and leisure. But to look away is only to continue giving violence free reign. What will help—indeed, what will save us—is to fix our gaze always on Jesus, the “pioneer and perfector” or our faith. Through the suffering and the sorrow, we look to Jesus.

Look how he navigates his own passion, suffering violence but never, ever being overwhelmed by it, never ever giving in to it, never ever committing it! Knowing of his impending death, still he offers compassion, understanding, empathy, and encouragement to his closest friends at their last supper together. Under threat of suffering to come, he still teaches and encourages, sustaining his weary disciples with a word. Confronted by soldiers and the betrayal of a close companion, he calmly speaks the truth and brings calm. Subjected to courts and authorities that make a mockery of justice, he maintains dignified silence. And on the cross, reviled by the crowds and mocked by a criminal hanging there with him, he forgives. “Father, forgive them,” he prays, “because they don’t know what they are doing.” At last, at the end, he calmly commends his spirit to his heavenly father, whom he still knows to be merciful and filled with steadfast love.

When we are torn up by pain—whether our own suffering or the anguish we feel as we see the suffering of others—may we look through it to see the way Jesus is in the middle of it. Indeed, to repeat Paul’s encouragement,
May the same mind be in us that was in Christ Jesus,
who, though he was in the form of God,
did not regard equality with God
as something to be [grasped],
but emptied himself,
taking the form of a slave,
being born in human likeness.
And being found in human form,
he humbled himself
and became obedient to the point of death—
even death on a cross.

Jesus does not grasp; he lets go. He “empties himself.” He gives up the need to be powerful, important, invulnerable, right, or any of those things that we so commonly grasp at in our lives. He gives them up and he becomes free to be present to himself and others. He becomes free to offer compassion and forgiveness, no matter the outer circumstances, even in the middle of extreme pain.  May the same mind be in us.

Photo by Josh Applegate on Unsplash