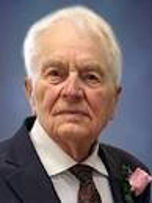 Alvin Harms (1923—2018) We remember Alvin Harms as the dear husband of Margaret Harms, loving father of Kathie, Tom (Karen), Mary Ann (Mark), and Phil, and devoted grandfather to Luke (Ashley), Jenny, Grace, Sarah, Keera, Amy, Isaak, and Magnus. He was a pillar and a role model for his family through his unconditional love, gentle spirit and unwavering faith.

Alvin Harms was born in Rosengart, Ukraine and he was just over two when he emigrated to Canada with his parents Jakob and Katharina Harms.  Al was raised in a German Mennonite home with his siblings Hugo, Charlotte, Isaac, Paul, Bill, and Hedi near Rosemary, Alberta.  Al’s childhood and most of his adolescent years were spent surrounded by his family, where his roots and faith were nourished, enriched by the freedoms of life in the open prairie.  His parents desired to be in a German Mennonite community just as they were previously in the Ukraine. His father made tremendous personal sacrifices by settling on the Rosemary farm, which was virgin prairie and sod needed to be broken. Poverty and hard labour were a reality. We know much of his life story through his writing. Alvin wrote several books on French literature and later, after retiring, he published numerous other works, including poetry, fiction and his life story, to name a few.   Al had no radio growing up, but hymns and Sunday school were cherished first memories of music. Alvin sought out a neighbour to sit and listen for the better part of an afternoon to hear what he described to be enthralling. It was the opera Faust.  Later, he was at the general store when he heard it again, this time being able to share this delightful sound with his brother.

Throughout his life, Alvin enjoyed vocal and violin lessons and he joined the Calgary opera chorus in performances in the 1970’s through to the 1980’s. To the end of his life he continued to exercise his vocal chords by singing scales and warm-ups to keep his lungs healthy and strong. In recent years he borrowed some of the grandchildren’s piano books and learned to play piano with Margaret’s encouragement. Together Al and Marg enjoyed listening to music as well playing duets on piano and violin.

Alvin attended school in a one room school house; subjects he loved and received prizes for were penmanship and oral reading. In order for Alvin to complete grade 12, he needed to move away to a Mennonite boarding school, Rosthern Academy in Saskatchewan. He was terribly homesick yet excelled in his studies.  He went back to the farm to help out yet he yearned for further education. In 1941 the province invited Alvin, a recent high school graduate, to attend normal school to get a quick course on teaching. There were special incentives, so he accepted the opportunity. At the age of 18 Alvin was officially a teacher and accepted a position as principal. He traveled by the Greyhound bus, bringing his bible and Oxford dictionary ready for the task in a two-room school house in Consul, Saskatchewan. These were the years of World War II and he kept true to his Mennonite pacifist convictions.

Alvin continued to further his education taking courses during the summer months and eventually received his Bachelor of Arts at the University of Saskatchewan (1951). He was married to his first wife Anne (1951) and studied as well as took a job as a reporter covering speeches, interviews and writing. He was accepted into a Ph.D. programme at the University of Colorado. In 1957 he and Anne drove to Boulder to complete his coursework then moved to the University of Alberta, where he had gained an appointment as an Assistant Professor of French to teach at its Calgary campus. He began teaching at what is known now as Southern Alberta Institute of Technology, as there was no campus in Calgary yet. In 1959 he started teaching university courses on German and then French. He has enjoyed his career at the University of Calgary in the Romance Languages Department. In recent years he had been learning Italian and he learned Norwegian together with Margaret.

God blessed Al in 1971 with his marriage to Margaret and together they enjoyed a blended family. Al was a loving and supportive husband and a best friend to Margaret. Their married life was rich and impacted their family, friends and so many people in the community. He was particularly fond of the Dutch pancake house and a special Italian restaurant here in Calgary, which they frequented often.

Alvin was committed to his family and loved talking hockey with his brothers and grandchildren. He always had time for his children, loved his extended family and cherished the friends he made at Coop and his favourite restaurants.    Alvin believed that environment contributed largely to the birth and development of his imagination, his inner life and introspective quality, his sensitive spirit to the beauties of nature and even his thirst for silence and solitude. Al was a deep thinker and poet and he lived life through feelings and intuition rather than on logic and reason. He was a romantic at heart. His love for Margaret was as deep as the ocean and he missed her beyond words for the seventeen days that she was gone.